I’ll Get Back To You…Or NOT! 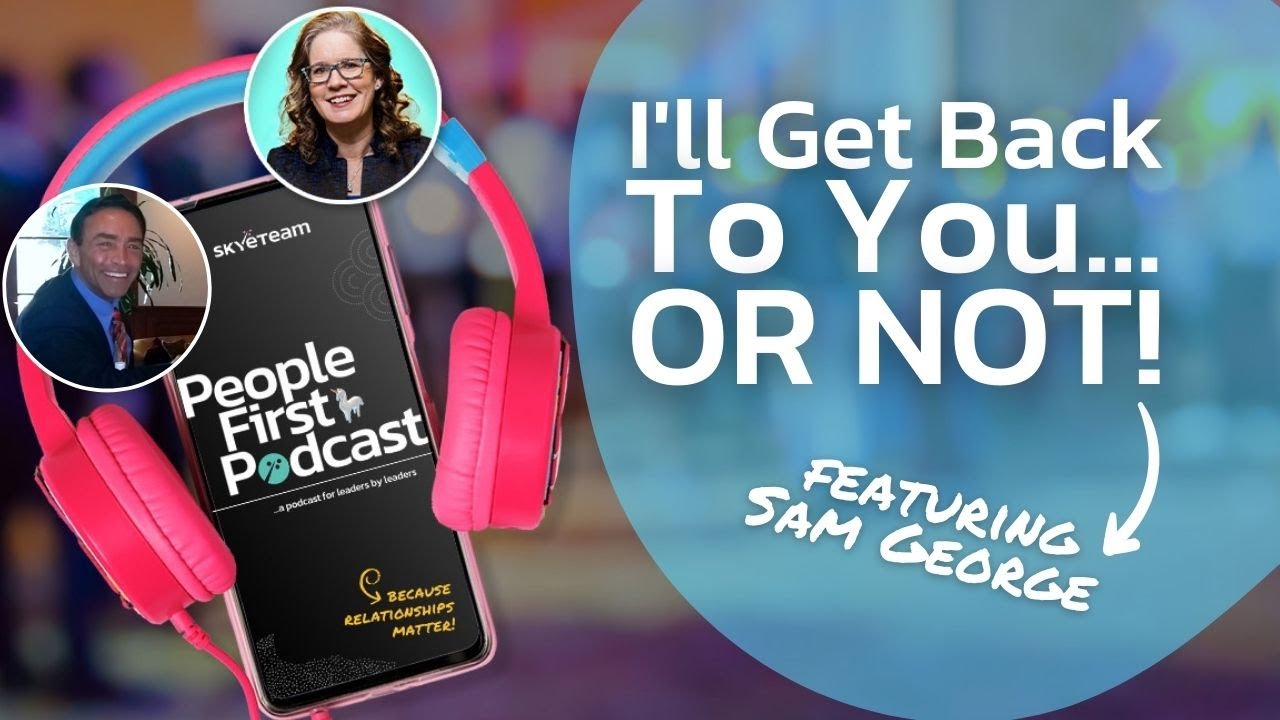 As a child, Sam George dreamed of becoming a United States Senator. But along the way, he discovered he could make more of a difference behind the scenes (there’s a leadership lesson!). Sam influences others through his book, The Great Divide: Retro versus Metro America, and his most recent book, I’ll Get Back To You: The Dyscommunication Crisis. In his latest book, Sam is the first to name and bring awareness to the cultural rift that has been brewing across America over the last few years – dyscommunication.

While most of us can look around and identify poor communication practices (have you been on social media recently?), dyscommunication is a nuanced form of miscommunication with real psychological implications. Simply put, Sam defines dyscommunication as communication that doesn’t have immediate feedback. Who doesn’t agree that being ghosted or simply not responded to feels awful? According to Sam, this is the main problem we face with today’s digital communication.

Though ghosting and slow response times can feel personal, Sam argues dyscommunication is actually structural. Technology makes it easy – normal even – to delay or deny response. Surely we’ve all experienced the internal spiral of not knowing if a message is being received, read, or even fully understood. Let’s be honest, the minute you send an email you’re already thinking about the response. How frustrating when you never receive one! As Sam earnestly points out, when our messages consistently go unreturned, we spin out of control.

I remember back in the day when I used to write memos on carbon paper – there was no immediate response there! Well, Sam tells us there’s a difference between correspondence and conversation. With correspondence, like letters or memos, there is not an expectation that there will be immediate feedback. Human conversation, however, is meant to connect and therefore anticipates feedback. Without immediate feedback, we may feel a lack of security that immediately translates to the relationship itself, i.e. they didn’t respond, they must hate me. In these situations, we can see how digital communication has radically changed our human communication. Sam would even argue it’s been one of the largest communication changes since the printing press!

According to his research, 70% of people have the following experience. If someone doesn’t return a message in a timely way, we will:
Experience anxiety
Decide something is wrong
Jump to the worst-case scenario
Catastrophize and create unfounded narratives.
I’m glad I’m not the only one experiencing this with some regularity. But how do we stop doing this? The first step is to understand why our brain acts like this in the first place.

Our brains think in patterns, also known as pattern recognition. According to Sam, without immediate feedback, the brain’s pattern gets put on hold. Left in limbo, the brain wants to complete the pattern, so it generates its own conclusions. While there are plenty of positive options for completing the pattern, our brain instead opts for a Negative Nancy approach. Why? Because the worst-case scenario most effectively accomplishes the punctuation point needed to complete the narrative.

I know, I know, the demands of our current structures do not always lend themselves to immediate communication, nor should they. But there are tips and tricks we can use to encourage quicker feedback from others, thus settling our miniature panics throughout the day.
Narrow the number of outlets –
In the days of Twitter, Zoom, Slack, email, texts, etc. we are splitting our communication focus. By minimizing these outlets, we streamline our communication.
Use their name –
Research shows there’s nothing we love more than our own name. This draws in the intended audience and provokes curiosity, which increases response rates.
Ask a question –
Conclude your correspondence with a question, inviting feedback.
Make it easy for them to respond –
Asking yes/no questions or providing a dichotomy invites an easier response and forces the recipient to act. The more work they have to do to answer, the harder it will be to get them to respond.
At the end of the day, dyscommunicaion is structural. By paying attention to it and its effects, we can all learn to be more intentional communicators and leaders.